I’m looking forward to working at Jonathans in 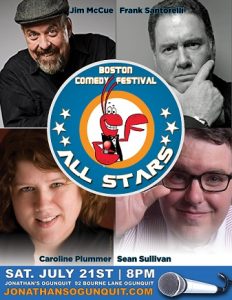 Frank Santorelli best known for his role of “Georgie” on HBO’s smash hit the Saproano’s.
Carolyn Plummer is one of Boston’s top comedians and is quickly making a name for herself as one of New Englands Top Comedic Headliners.
Sean Sullivan
Sean was recently profiled for his work in the Boston Globe and was named one of the top six “Fools” in the city for the Boston Herald’s “April Fool’s Day” spread. Sean was a finalist in last years Boston Comedy Festival beating out hundreds of comedians to compete for $10,000.