You are here: Home / Events / The Elbow Room Jim McCue 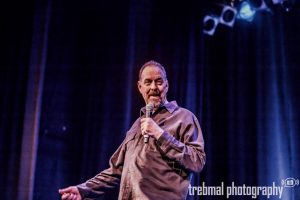 2019 has been a huge year for comedian Jim McCue. Jim’s Internet comedy special “Nothing Personal” has gone viral with over 600,000 views in its first month! When Jim was contacted by a production company from of all places, Utah he never expected his special on Drybar Comedy to become such a big hit. When Jim McCue started comedy in the nineteen hundreds Johnny Carson was still on the air and getting on that show was the best chance a StandUP Comedian had to become successful. Suddenly Jim has over 35,000 twitter followers @JimMcCue and a new Comedy Special “Nothing Personal” on Drybar Comedy that has gotten over 600,000 in the 30 days. Jim is also putting the finishing touches on his graphic novel ” Sketchy Facts” based on his funny facts tweets and stories and observations from over twenty-five years of doing stand up comedy. Jim has also been noticed by Iheart radio who will be launching his new national podcast. If that was not enough Jim McCue founded the Boston comedy festival which will be celebrating its 20th hilarious year this November as one of the top comedy events in the country!