The Characters in Steve Sweeney’s act plot to kill him!

You are here: Home / Podcasts / Boston Comedy Legend Steve Sweeney talks to me about his new film

Steve Sweeney has a new film being premiered at the Boston Comedy Festival called of all things Sweeney Killing Sweeney. The film premise is about Steve trying to cut the local characters he is famous for out of his act and then his characters decide to kill him.

Staring in the film comedians: 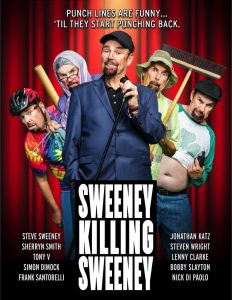