I CAUGHT UP WITH ED DRISCOLL AT THE JOHNNY CARSON COMEDY FESTIVAL IN NEBRASKA. I FOUND THIS AUDIO LIKE TWO YEARS LATE AND MUST BEG FORGIVENESS OF ED FOR PUTTING IT UP SO LATE. PLEASE BUT EDS BOOK SPILLED GRAVY IT IS A GREAT READ.

ABOUT ED DRISCOLL: (BIO STOLEN FROM HIS WEBSITE) EDDRISCOLLONLINE.COM

Ed Driscoll began his comedy career as a performer at clubs and on television in his hometown of Pittsburgh, PA. He quickly gained national notoriety as a touring comic, opening for such performers as Jay Leno, Steven Wright, and Robert Klein.
Driscoll then moved to Boston to take advantage of the city’s thriving club scene, and taught a well-received course in stand-up comedy at the Boston Center For Adult Education. A favorite performer at the plethora of local universities, Ed also wrote and performed sketches as part of the cutting-edge troupe “Cross Comedy,” led by comedian/actor David Cross.

Driscoll was recruited by Dennis Miller to move to Los Angeles to write on HBO’s “Dennis Miller Live.” His work there was recognized with an Emmy, a Cable Ace Award, and a Writers Guild of America Award. Ed soon began writing material for Billy Crystal, and drew high praise for his work on the 69th, 70th, 72nd, and 76th Academy Awards.

In the last few years, Driscoll served as Supervising Producer on “The Showbiz Show With David Spade”, and did a stand-up tour in support of his first book, “Spilled Gravy.” He continued to write for such artists as Danny Gans, Joan Rivers, and Jeff Dunham, and also wrote material for HBO’s “Comic Relief,” benefiting the victims of Hurricane Katrina. Ed has also served as a judge on the Academy of Television Arts & Sciences Blue Ribbon Panel to choose the Emmy nominees for Best Comedy Series.

Known for his quick wit, Driscoll is a highly sought “punch up” writer, contributing to various television series such as “The Drew Carey Show,” and various feature films such as “National Security” and
the “ Scooby Doo” movies.

Driscoll’s television appearances include “Politically Incorrect” and NBC’s “Comedy Showcase.” A rabid sports fan, Driscoll has appeared on ESPN’s “The Espy Awards,” “Rome Is Burning,” and “Cold Pizza.” Recently, Ed hosted Dakota Pictures pilot “Behind The Lines”, an inside look at the writing process of some of the most popular shows in television history.

Ed is currently a punch-up writer on the hit ABC Family sitcom “Melissa & Joey.” He’s also the writer of the popular Yahoo! web series, “Odd News.” Driscoll’s second book, “Looking To Click”, will be released this month, and his third book,  “Unmoved Chess Pieces”, will be published early next year. Ed has just been nominated for another Emmy for his work on the 84th Academy Awards. 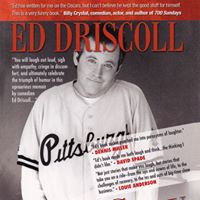