If everyone’s Irish on Saint Patrick’s Day then the best place to be on March 16 is the Music Hall to celebrate with Irish dancing, music, and hilarious comedy.

Joey Carroll
Joey was featured in NESN’s Roughing It and WCVB’s Chronicle, as well as Comedy Central’s Pulp Comics and lastly on NECN’s Broadside with Jim Braude.

Kristin O’Brien
Kristin has been entertaining all over New England and Texas. Auntie Kristin” will make you laugh with her views on marriage child rearing and dating.

Hosted by Will Smalley
Will Smalley has readily established himself as one of the powerful new voices and joke writers in the Boston comedy and The Boston Comedy Festival.

Dancers:
The Murray Academy is Northern New England’s premier school for Irish dance, located in Exeter, NH. The academy is home to 150 students, including Regional/National champions and World medal holders.

McDonough-Grimes Irish dance is led by John Grimes, Riverdance cast member (2009-2012). In five years, the school has produced World and National qualifiers and has been featured on NH Chronicle. 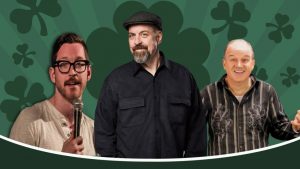