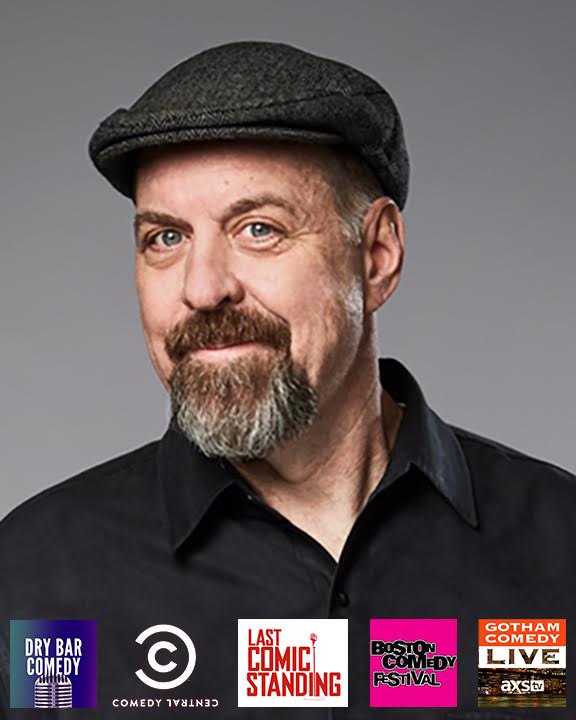 Ask Jim anything.  I will read your questions after my live performances while doing a Facebook live video! Check back here to see my recently recorded Facebook Live videos!

I’m lookin forward to working the:

The Schorr Family Firehouse Stage is the first performance venue of the Goodwill Theatre Performing Arts Complex. It is an intimate and flexible theatre space located on the first floor of the former Johnson City Municipal Building Fire Station. This venue currently hosts over 65 events per year in an annual season that runs from September thru June.
Jim McCue founded the Boston Comedy Festival now in its 23rd year. Jim has been doing comedy for 33 years.
Jim McCue went viral this year with his DryBar special “nothing personal” which has had 4 million views, Jim has been featured on Comedy Central, Comcast Comedy Spotlight, NBC’s “Last Comic Standing,” RedEye on Fox news, Live at Gotham AXS and Jim has made several appearances on Bob and Tom show.
Jim has toured the globe Entertaining our troops and wrote a book called Embedded Comedian describing some of his adventures. Jim started his comedy career in Boston performing with Iconic Comedians like Bill Burr, Joe Rogan, Patrice O’Neil, and many more.
Carolyn Plummer
Has traveled extensively and to many parts of this country, few have dared to venture. She worked at clubs, colleges, dead animal lodges, theatres, and corporations appearing with many of the top headliners in the business. Carolyn participated in numerous festivals including the Burbank Comedy Festival, Boston Comedy Festival, and The Women in Comedy Festival. 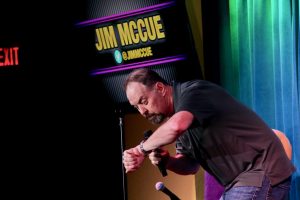 Three of my favorite things Bowling Standup Comedy and BBQ. I’m looking forward to knocking down some pins and having some good food.

We feature a slow smoked and grilled BBQ menu. 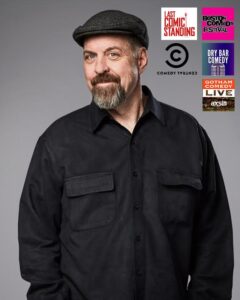 A mixture of witty “A-list material” and his ability to work off-script has earned Jim McCue the title “Boston’s King of Crowd Work!” It’s not only his height of six foot six that makes Jim stand head and shoulders above club comedians of the “stick-to-the-script” variety. Jim blends thought-provoking material and uncanny improv skills with a style that encourages audience participation. No two shows are ever the same!

Jim McCue went viral this year with his DryBar special “nothing personal” which has had over 3 million views, he has been featured on Comedy Central, Comcast Comedy Spotlight, NBC’s “Last Comic Standing,” Live at Gotham AXS TV, and “Roughing It” on NESN in his native New England.

Since 2000 Jim has also entertained U.S. troops at more than 100 bases around the world. An account of his experiences performing for the troops has recently been published in Embedded Comedian which Jim describes as a “field manual for comedians in a war zone.”

With his unique act, Jim keeps the audience on their toes. Volleying between set material and working for the crowd, Jim cracks jokes with amazing timing and whip-like precision. A unique blend that is sure to leave the audience roaring with laughter!

Carolyn Plummer is one of the top comedians in Boston and has proved her talent all over the country!

Carolyn Plummer. God help us. Some comics rely on the monumental events of the day or the faux pas of the rich and famous. Not Carolyn. Carolyn pulls material from the hum-drum, day-to-day monotony of the life of every man; and she does it well. To Carolyn the monumental is easy… it’s our existence that’s so hard, yet so ridiculous. Some women look in the mirror and complain that they aren’t pretty enough, not rich enough, not young enough. Carolyn gives her reflection the finger.

Jim Has Been Featured On:

Stay up to date on Jim’s blog posts, podcasts, and his tour schedule.

I love westerns. In complicated times like these, there is nothing more comforting than a western. Tonight I discovered a gem called the Tin Star with Henry Fonda and Anthony Perkins.The 1957 black and white film…

END_OF_DOCUMENT_TOKEN_TO_BE_REPLACED

Comedian Ken Rogerson will headline a great line up of comedy this weekend at McCue’s Comedy Club in Portsmouth. Ken has appeared on NBC’s , Late Night with Conan O’Brien, The Late Show with David Letterman…

END_OF_DOCUMENT_TOKEN_TO_BE_REPLACED

The highly successful Comedy and Cabernet series is returning to City Winery. Powered by the Boston Comedy Festival with a dazzling lineup.

END_OF_DOCUMENT_TOKEN_TO_BE_REPLACED

My guests will include: Candy Clark (American Grafitti, The Man Who Fell To Earth w/ David Bowie), Burton Gilliam (Blazing Saddles, Back To The Future 3), Butch Patrick (Eddie Munster, LidsVille) along with the psychedelic surf…